The budget speech will be delivered on 22 Feb 2017, however unknown to most, there was a pre-amble in the form of a consultation exercise by the HK government to solicit proposals and views from the public on the direction/focus of the budget.   Searchable proposals were submitted by large accounting firms, several chambers of commerce and the HKICPA – thrilling reading material if you are interested (see the links below).   For those of you who prefer a lighter read, I found two interesting elements from the proposals urging the HK government to:

According to PwC, they expect the fiscal reserves of the HKSAR government “will amount to HK$913 billion by the end of March 2017, equivalent to 23 months of total Government expenditure”.   That’s a nice amount to have for a rainy day.   There’s a lot that could be done with that kind of financial backing in our city – along from welcome tax relief and random initiatives that do not correlate with what SMEs actually need to grow, innovate and flourish, it should provide sufficient confidence to our government for bold, impactful changes to be made in areas including:

Last month’s news of Abercrombie & Fitch and Forever 21 announced the phased closing of their stores in Central and Causeway Bay as a response to a mainland retail slump in Hong Kong.  Surprisingly, this morsel of November news was paired with Alibaba’s outrageous “11.11 Singles Day” retail results and the launch of Tmall.hk.

Commercial retail space is not getting any more affordable in Hong Kong – this is supported by independent statistics and the surprising amount of untenanted space. Even our government is in the process of studying the development of underground retail spaces –  intended to allow new players to the retail scene with hopefully more affordable rent in exchange for sunlight.

Originally, the premise behind large stores was to make the retail shopping experience convenient for consumers – multiple products under one roof. Globally, this convenience is now replaced by online and mobile shopping especially in countries with copious amounts of land area. 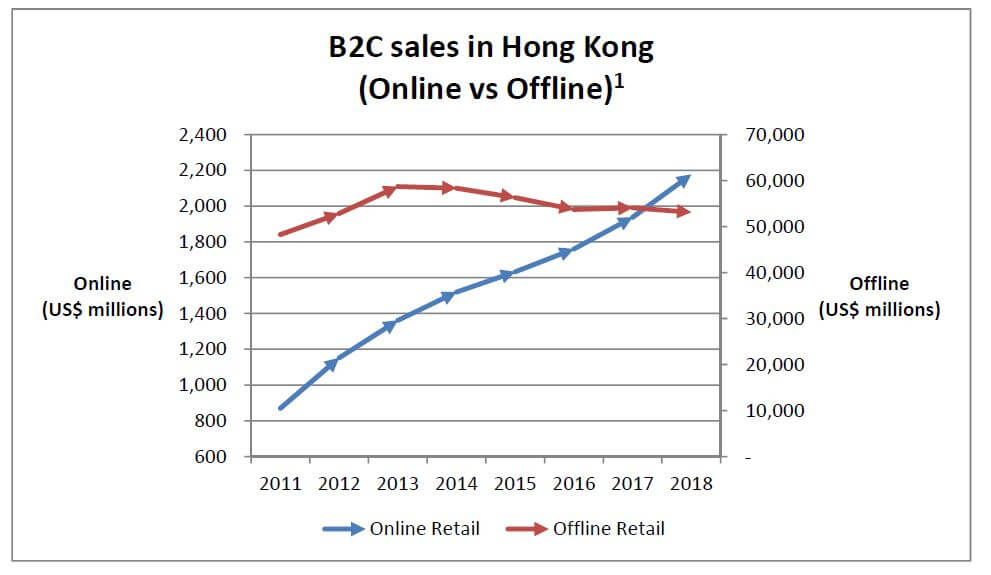 Looking at local numbers, there is no doubt that online retail is growing faster than in-store retail in Hong Kong. From the chart, a key observation is that online sales has more than doubled between 2011 and 2016 versus offline sales being steady to declining. In a city like HK with minimal space, love of shopping and a 87% smartphone2 penetration rate, what does this signal for the retail sector in HK from a merchant and consumer perspective?

At the Tmall.hk launch, “Alibaba said the festival’s (Single’s Day 11.11) arrival in Hong Kong was also intended to “test the waters” for its global expansion that might one day compete head to head against US rival Amazon.”3

Putting aside the specifics of the statement, let’s consider the fact – a rather large and successful online retailer decides to use a city of roughly 7.5 million people (on a good day everyone is shopping) to test their global expansion strategy.

How should small retailers respond to this data?

The face and strategy of offline retail needs to change in light of increasing rents and consumer behaviour – co-work spaces4 have done it for real estate, why not retail? It’s about a business being able to adapt, innovate and maintain resilience throughout its life-cycle.

Some additional food for thought:

Enough from me – over to you.

Cornerstone HK and Xero would like to invite you to the Xero Roadshow this Thursday at Cyberport.

The Xero team will be speaking about their vision for the region and benefits of what the cloud can offer.

We would love to see you there and hear about how we can help.